With significant historic destinations like Colonial Williamsburg, Monticello, Jamestown, and Mount Vernon, Virginia draws countless visitors looking to learn more about the Commonwealth’s past each year. In addition to these monumental landmarks, if you walk more than a few feet in any direction in Virginia, you’re almost guaranteed to step foot onto hallowed grounds of an American Revolution battlefield or a Civil War site. But such a rich history also brings an eerie side effect: a long list of supposedly haunted sites. Virginia has more than its share of ghost stories, and we have compiled a few of the spookiest locations that are open to the public. Experience a truly haunted Halloween when you visit these ghostly grounds. Originally built as a tavern and inn for weary travelers to rest, Gadsby’s Tavern Museum is the site of one of the most curious mysteries in Virginia history. In 1816, a young woman traveled to Alexandria on a ship with her husband, contracting a disease on her journey that led them to seek rest and rehabilitation at the inn. However, once brought to Gadsby’s, her health quickly deteriorated, and on her deathbed, she made all of the people that attended to her swear an oath to never reveal her identity. To this day, no one knows who she was, and she is buried in St. Paul’s Cemetery with a gravestone marked “Female Stranger”. Both the cemetery, located near Duke Street, and Room 8 of Gadsby’s Tavern are supposedly haunted by the ghost of the young woman, forever unknown yet never forgotten. 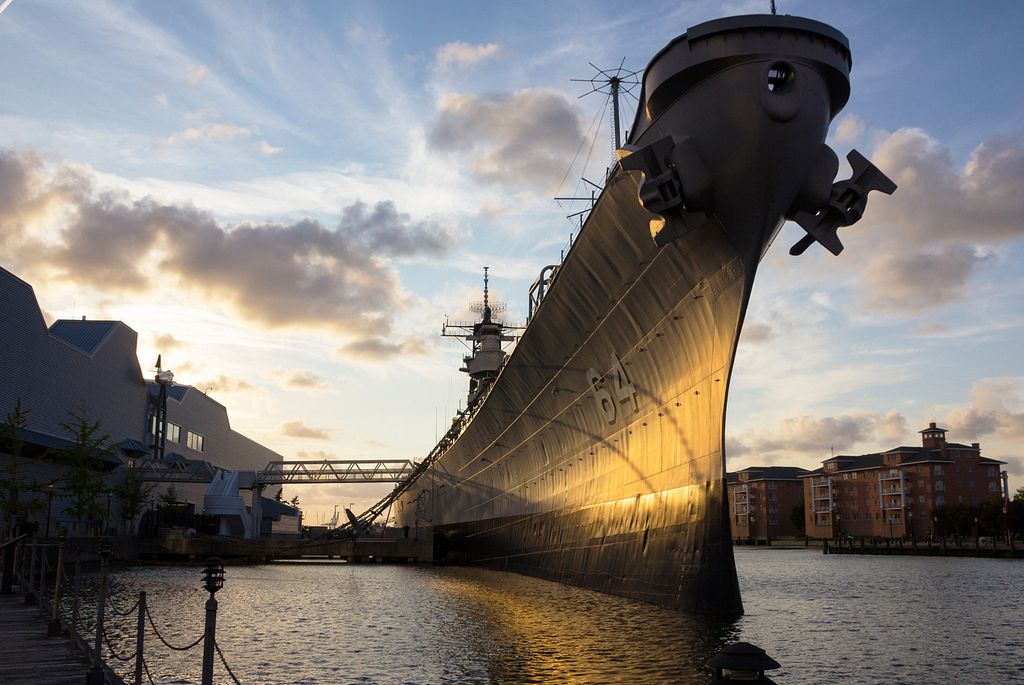 One of the largest battleships to have ever been built by the U.S. Navy, the Battleship Wisconsin looms large over Nauticus Museum and downtown Norfolk’s Waterside Drive. Take a self-guided tour of the ship or get tickets for the guided tours, where you can hear all about the stories of former military servicemen and the ghosts that are said to now roam the ship. Want to get an even spookier experience on this haunted vessel? The museum hosts overnight stays on the ship, giving you the chance to potentially meet the spirits firsthand.

Lexington has numerous historic sites, but few are as creepy as the Stonewall Jackson Memorial Cemetery, where the famous Confederate general was laid to rest. Take a tour of Lexington that ends in the cemetery with Haunting Tales, Lexington’s Ghost Tour, where entertainers dressed in old-fashioned attire take you back through the history of Lexington and the chilling tales that have many believing there are ghosts roaming the region, especially during Halloween (cancelled in 2020 due to COVID-19). Some even swear they have seen Jackson and fellow Confederate General Robert E. Lee on his horse, Traveler, as they wandered down the now-unfamiliar streets of Lexington.

For an overnight stay in a haunted house, book a room at The Martha Hotel & Spa in Abingdon. The building served as a hospital for wounded soldiers from both sides during the Civil War, and many unfortunately never left the hospital to return home. The Martha is said to be haunted by a few of these phantoms, apparently unfinished with the world of the living. Learn about the story of the Yankee Sweetheart, the Phantom Horse, and the Reappearing Bloodstains when you stay at the historic Martha Hotel & Spa this Halloween. Most cemeteries are at least a little creepy, but Richmond residents believe Hollywood Cemetery to be especially haunted. The landmark’s deceased residents include over 18,000 Confederate soldiers, two United States Presidents, the President of the Confederacy Jefferson Davis, and 25 Civil War generals. In addition to these important burial memorials, you’ll come across a large, cast-iron Newfoundland dog marking one small grave in the cemetery. The statue stands guard over the grave, holding the remains of a young girl who tragically died in 1862. Another strange site within the cemetery is the tomb marked W.W. Poole. The site seems similar to the other mausoleum style graves, but according to gossip and lore, the Richmond Vampire dwells inside the tomb. These local legends have Richmond residents believing that those buried in Hollywood Cemetery may not be resting in peace, but instead roaming the grounds at night, looking to prey on unsuspecting visitors.

The Exchange Hotel was built in 1860 beside an important railroad junction, offering passengers worn out from long trips a place to rest. Unfortunately, two years later the Civil War came to the region, and the hotel had to be converted into a receiving hospital. In less than a year, over 23,000 sick and wounded soldiers were brought to the Exchange Hotel, and by the time the war ended, the number had reached over 70,000. Although no exact numbers exist for the casualties that occurred within the hotel’s walls, over 700 people were buried on the surrounding grounds during the war. The hotel now functions as a Civil War Museum, with artifacts, uniforms, and firearms on display, but you may hear the faint moans and cries from soldiers that never left the premises when you visit.

Many of the places we have mentioned on this list had links to the Civil War, but few are as significant as Sailor’s Creek Battlefield Historic State Park, where the last 72 hours of the war were fought. The battle was bloody, with nearly a quarter of General Robert E. Lee’s army either killed, captured, or wounded. In need of a makeshift hospital, the Confederates used the Overton-Hillsman farmhouse on the property, with the battle raging literally in the backyard. Bloodstains still mark the floors of the house, and countless soldiers were buried in mass, unmarked graves all over the property. If ghosts are real, they are likely hanging out around this spooky state park. 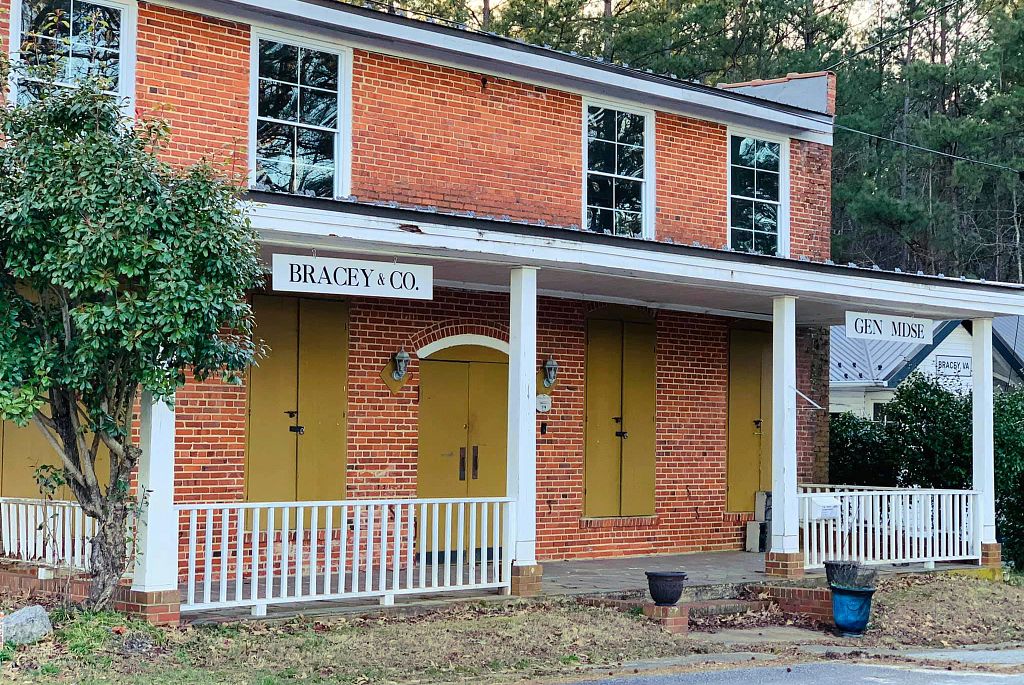 As one of the earliest general stores in the area (originally opened in 1900), the Bracey General Store brought locals in for all sorts of goods and household items, even carrying coffins for the more unfortunate occasions. In addition to Bracey residents looking to stock up on home supplies, the general store was frequently perused by travelers passing through town, as the store was located near the train depot. While no specific tragedies are credited for the hauntings, current townsfolk say that restless traveling spirits can still be seen walking briskly into the general store, and the owner of the property claims to have captured many of the strange sightings on her security cameras. Sanatoriums were notoriously cruel in the early 20th century, using methods like electroshock therapy, lobotomies, and other archaic practices on the patients. The trials had no positive effect for the patients, who acted as test subjects for the doctors curious to see the results of such savage experiments without practicing on the general public. St. Albans Sanatorium was one such facility, and the tortured patients did not always survive the tests. Additionally, the property was the site of an extremely violent Civil War battle, and visitors today report hearing rifles or cannons firing and smelling gun smoke when walking the grounds. With so much misery occurring on the property, it is no surprise that St. Albans is considered one of the most haunted places in Virginia.

As an early American settlement, numerous historic houses in Colonial Williamsburg are believed to be haunted by past residents. One such property, the Peyton Randolph House, housed the Peachy family, who rented the property to many guests during their residency, including a young unnamed soldier attending the nearby College of William & Mary. Unfortunately, the young man fell ill during his stay and never recovered. He died in the home, and today, there have been multiple accounts of visitors spotting a young man walking sadly through the house or hearing heavy footsteps above their heads, even though no one is upstairs. Take a complete tour of Colonial Williamsburg’s creepiest locations on the Colonial Ghost Tour, a roughly hour and a half moonlit tour of the haunted historic grounds (cancelled in 2020 due to COVID-19).

The constructed grounds on which the Ferry Plantation House resides date back to 1642, when the second ferry service in Hampton Roads began carrying passengers across the Lynnhaven River to plantations and the county courthouse along the waterway. After the ferry closed, several buildings were erected in succession, only to be torn down or destroyed. Eventually, the last buildings fell into disrepair and were all but forgotten by the living. But the previous residents are said to have never truly left the grounds; eleven spirits have been reported to haunt this house, including victims of a shipwreck that occurred in 1810. After the city completed extensive renovations, the house was added to the Virginia Landmarks Register and now serves as a museum, allowing people to visit the historic grounds. Built around 1800, the Captain Timothy Hill House has been dated as the oldest house still standing on the island. The house avoided certain demolition in 1980 when new owners moved it from the original location, but the home’s mysterious past can still be felt by visitors. The home originally sat right by the water, where a young family member or neighbor carved likenesses of the passing trade ships on the rough wood exterior of the building. This early graffiti is still visible today. But what lead to the haunted history began with Captain Timothy Hill and his daughter, Jennie. Captain Hill favored Jennie above his other children, and wished to marry her to a wealthy, well-educated man. However, a young man named Tom Freeman who grew up with the family, was in love with young Jennie. When the Captain refused to allow the marriage, Tom became desperate and ambushed Jennie and her mother in a field. Although the details are unclear, Tom ended up shooting Jennie and her mother. While the mother survived, Jennie died from her wound, and Tom took his own life in despair. It is believed that Jennie still hangs around the house, pining for the promising future so suddenly taken from her.

There are dozens of historic sites in Virginia that are rumored to be haunted, and if you’re looking for a scare this Halloween, these eerie destinations are sure to deliver bone-chilling fun. Which peculiar places in Virginia do you visit for Halloween?